Adding a 12V outlet to your vehicle for powering 12V accessories is fairly simple and can normally be carried out in just an hour or so. The tools and the amount of time required depends on how and where the 12V outlet is installed. 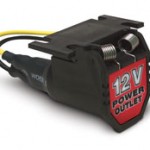 Direct wiring to the battery should also use an inline fuse holder and an appropriately sized fuse. The ground for the outlet should always go to the vehicle chassis.

Once both terminals are snapped back into the fuse block the new 12V outlet needs to have it’s negative wire connected to the chassis of the vehicle (the shorter the ground wire the better). Once the ground wire is connected a fuse should be placed into the new fuse block location feeding the new 12V outlet and then the negative battery terminal re-connected to the vehicle battery.